An animation of the painting Corpus Hypercubicus of Dali

Realized in 1954 it represents a crucifixion on the «net» of a cube of dimension 4, while the classical cross is the net of an ordinary cube in dimension 3.

The construction done in Cabri 3D, presented by Jean-Marie Laborde at NCTM congress in april 2006 in St-Louis, realizes the folding of this 4-cross into its cube of dimension 4 through a perspective projection. The net sometimes called tessaract, is made of a central cube, surrounded by 6 other cubes, a last one being added at the bottom. (The ordinary cross can be analogously built from a central square surrounded by 4 squares on each of its edges and a 6th square at the bottom) 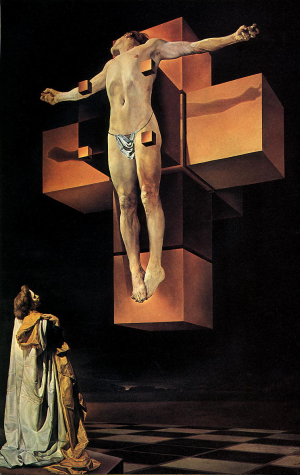 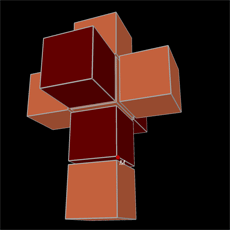